Homemade baked apple donuts coated with a sweet and crunchy cinnamon sugar topping. These tender cake donuts are super moist and bursting with flavor from fresh applesauce, good olive oil, vanilla, and apple pie spice. Quick and easy to whip up for a fall breakfast treat, and made with just ten simple ingredients (and a vegan option).

Preheat the oven to 400℉. Grease two donut pans with butter or baking spray. Set aside.

In a large mixing bowl, whisk together the flour, sugar, baking powder, baking soda, apple pie spice, and salt until combined. Set aside.

In another mixing bowl, whisk together the applesauce, olive oil, milk, and vanilla until smooth and combined.

Fold the applesauce mixture into the dry ingredients, until just mixed and no streaks of flour remain.

Transfer the batter to a large piping bag (or a ziploc bag), snip off the corner, and pipe the batter into the donut pans. Each donut mold will be filled almost to the top.

Bake until golden brown, and a toothpick inserted into the center of each donut comes out clean, about 10-12 minutes. Remove from the oven and let cool in the pans for 10 minutes before transferring to a baking rack to cool.

When the donuts are cool enough to handle (15 minutes or so), add the melted butter and cinnamon-sugar mixture to two small shallow bowls. Dip each donut in the melted butter followed by the sugar topping until well-coated. Enjoy!! 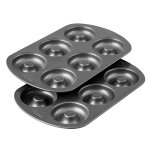 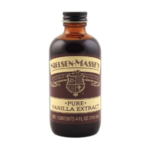 ¹ Make your own apple pie spice: mix 1 tsp ground cinnamon, 1/2 tsp ground ginger, 1/4 tsp ground cloves, and 1/8 tsp ground nutmeg.
² Make these vegan by using almond milk (or another dairy-free milk of choice!) in the batter, and vegan butter in the topping.
³ These apple donuts are best the day of, but will keep for a day or two in an air-tight container at room-temperature.