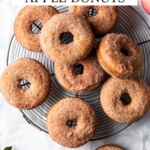 Homemade baked apple donuts coated with a sweet and crunchy cinnamon sugar topping. These tender cake donuts are super moist and bursting with flavor from fresh applesauce, good olive oil, vanilla, and apple pie spice. Quick and easy to whip up for a fall breakfast treat, and made with just ten simple ingredients. Vegan and gluten-free friendly!

My parents came to visit last weekend, and we did the most October-y things possible – going apple picking, decorating our front porch with colorful mums and pumpkins, and baking up not only an apple pie, but some homemade apple donuts with our bounty.

Just having them here is a treat in itself because we live so far away from each other now, but all of the seasonal cherries-on-top made my fall-loving heart oh, so, happy.

And still making me happy? These cinnamon sugar apple donuts on repeat. They’re not only delicious, with a moist and tender crumb, and sugary crunch on top, but incredibly quick and simple. Made with just 10 ingredients (that I bet you have on hand right now), they taste so much like everything to love about this season I almost can’t stand it.

Not only are these applesauce donuts sweet and flavorful, with a perfectly moist and tender, almost muffin-like texture, but they’re super easy to make. And since the recipe takes less than an hour to make from start to warm-from-the-oven, sugar coated goodness, you won’t have to get up at dawn to make them for breakfast.

Most apple donuts use apple cider for that wonderful, seasonal, apple flavor we all love – like in my homemade apple cinnamon rolls – but in this case, I opted to use fresh applesauce, which not only adds moisture and flavor, but speeds up the baking process (no cider to reduce), and makes these donuts egg-free (and easily vegan).

The ingredients you’ll need to make these baked apple donuts:

Perhaps I’m a lazy baker, but most of my favorite recipes – the ones I make over and over again – are full of simple ingredients we have on hand anyway, and that’s definitely true here. These are the ingredients you’ll need with tips on substitutions:

And don’t forget melted butter, cinnamon, and sugar for the crunchy topping!

The best topping for apple donuts

A quick dip in melted butter, followed by a generous roll in cinnamon and sugar. That’s it!

You can also choose to top these with a glaze (I’ve made both maple and caramel versions), but I’m partial to good, old-fashioned cinnamon and sugar which tastes more like the classic apple cider donuts you’ll find at apple orchards and farm stands this time of year.

How to make homemade apple donuts

This recipe is about as low-maintenance as donuts get! Not only are these apple donuts healthier than their fried counterparts, but they take a lot less time to make than traditional, yeasted donuts. No kneading, rolling, rise time, or messy frying.

And they get bonus points for not requiring a mixer or unusual ingredients. You’ll need just two mixing bowls, and a handful of measuring cups and spoons (less if you measure by weight). You can start to finish make (and devour) these beauties in under an hour, so they’re great for even a last-minute weekend breakfast treat. Here’s how we make them:

Find all the exact recipe measurements and full instructions below.

Yeast donuts are the most traditional, with a light and airy honeycomb crumb and slight chew. They’re simpler in flavor, and not all that sugary apart from a sweet glaze on top. They rise thanks to yeast as the name implies, and are rolled out and cut before being fried.

Cake donuts – such as apple cider or old-fashioned donuts – rely on chemical leaveners (baking powder and/or soda) instead of yeast, resulting in an often less-structured batter. They’re generally much sweeter than traditional yeasted donuts, and come in many more flavor variations, and have a denser, more crumbly, cake-like texture.

And baked donuts forego the yeast and oil altogether and are baked in a donut pan. The texture is most similar to a slightly dense, very moist muffin, and in the case of these cinnamon sugar apple donuts, lots of apple and spice flavor.

All three styles are delicious in their own right, but I’m a sucker for the ease of baked donuts at home.

While this applesauce donut recipe is quite simple, you will need a few special kitchen items to make them.

Can I make these baked apple donuts into muffins?

Sure! Instead of donut pans, you can bake these in a lightly buttered mini muffin pan at 400℉ for 9-11 minutes. You should have enough batter for about 30 mini “donut hole” muffins. Or, you can also bake them in a regular muffin pan starting at 400℉ for 8 minutes, then 350℉ for another 6-8 minutes, until the tops are gently domed and a cake tester inserted into the center comes out clean.

How to store applesauce donuts:

These apple donuts are best the day of, warm from the oven and freshly dipped in the cinnamon sugar topping. If you have extras, they will keep for 1-2 days in an air-tight container at room-temperature.

Looking for more tasty apple recipes? These are some of my favorites:

If you make this baked apple donut recipe, be sure to tag me on Instagram with the hashtag #forkknifeswoon and leave a comment and rating below letting me know how you liked them! ★★★★★ Star ratings are especially helpful because they help others find my recipes too. xo, Laura

Homemade baked apple donuts coated with a sweet and crunchy cinnamon sugar topping. These tender cake donuts are super moist and bursting with flavor from fresh applesauce, good olive oil, vanilla, and apple pie spice. Quick and easy to whip up for a fall breakfast treat, and made with just ten simple ingredients (and a vegan option). 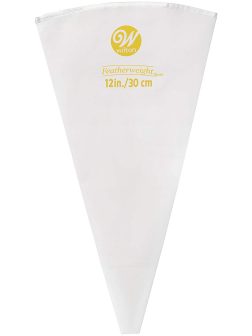 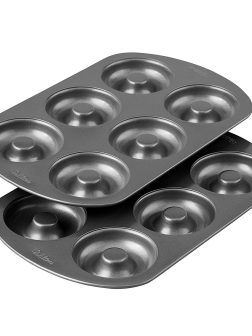 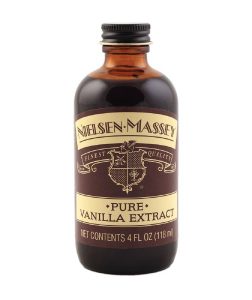 ¹ Make these gluten-free: substitute an equal amount (by weight) of an all-purpose 1:1 gluten-free flour blend such as Bob’s Red Mill (296g).

³ For vegan apple donuts, substitute unsweetened almond milk (or another dairy-free milk of choice!) in the batter, and vegan butter in the topping. Note: if you’re measuring in grams, be sure to check the volume conversion, as different milks may vary in grams/cup. I often use Malk almond milk (170g).

These apple donuts are best warm from the oven the day of, but will keep for a day or two in an air-tight container at room-temperature.