Given how often we eat oats for breakfast, this cozy, homemade brown sugar oatmeal recipe was certainly due for an update.

It’s delicious and nearly foolproof, and while I mix up the toppings throughout the year, depending on the fruits and berries in season, I particularly love this brown sugar oatmeal in the Fall, when apples and pears are in season.

Thick and creamy, brown sugar sweetened, vanilla-scented oats topped with luscious, caramelized maple-cinnamon apples makes for an indulgent and tasty way to wake up on a chilly morning.

When I first published this recipe a few years ago, we were deep into a North Carolina winter, with temps regularly in the 20s. We’d just adopted our puppy, Mack, and taking him outside for any amount of time was an unimaginably cold experience for this Southern California native.

I was craving hearty, comforting breakfasts like nobody’s business, and this oatmeal was my perfect remedy.

Even though we have (mostly) milder weather here in Washington, as soon as the leaves even hint at beginning to turn, I still love starting the day out with warm-you-up-from-the-inside goodness.

And this creamy, homemade brown sugar oatmeal still hits the spot, especially with a big scoop of sweet cinnamon apples on top.

Originally published on January 23rd, 2013. I’m (slowly) going back through my recipe archives, updating some of my favorites with new photos and information.

for the brown sugar oatmeal

for the maple cinnamon apples

for the brown sugar oatmeal

for the maple cinnamon apples 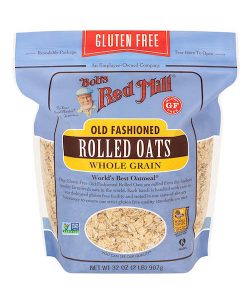 ¹ Be sure to check if your oats are certified gluten-free, if that’s a concern.