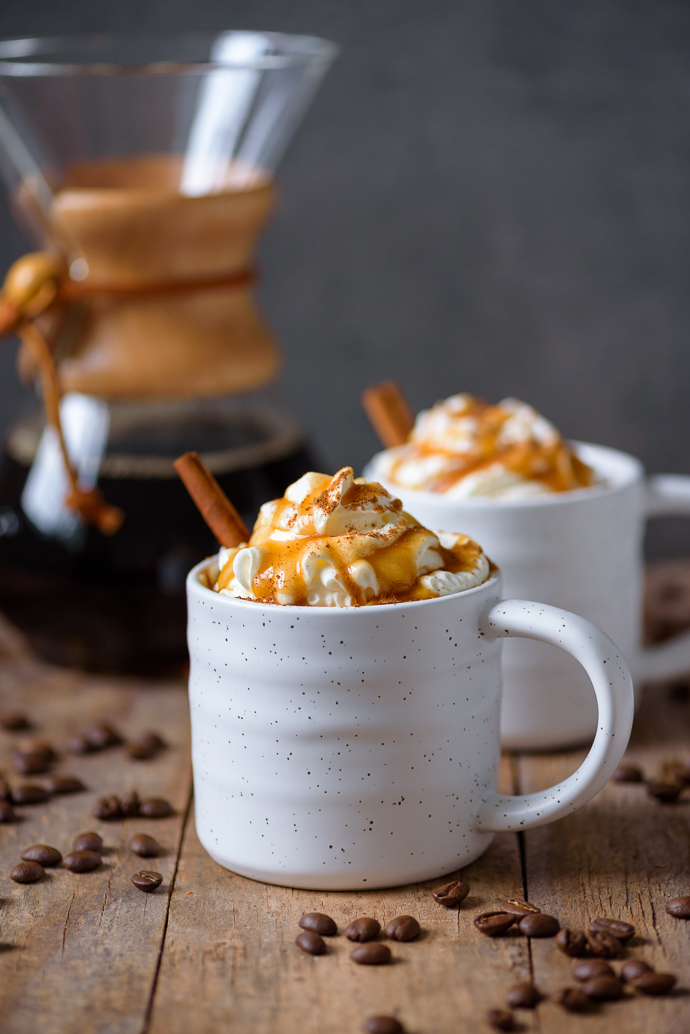 I’m working with Dunkin’ at Home to bring you this Cinnamon-Spiced Caramel Latte recipe today. Thank you for supporting the brands that support Fork Knife Swoon!

There’s something about richly golden caramel that just screams Autumn, and we’re sure in the midst of that coziest of all seasons. These are the glorious days of nubby cashmere socks, cheerful stacked pumpkins and mums and changing leaves, and warm, steamy mugs of spiced cider and tea and my very favorite indulgence of all, coffee. It’s just not morning without it.

Lately, it’s a several-times-a-day indulgence, especially on these chilly days, when even the sun seems hesitant to rise and take on the morning, and the bed covers have become ever more tempting to hide under after the alarm goes off.

While I’m almost always sipping something steamy throughout the day, I’ve been relishing my early morning, homemade latte ritual, which recently has been one of these cinnamon-spiced caramel lattes, made with Dunkin’ Donuts® coffee, frothy, brown sugar and cinnamon-flecked milk, and a drizzle of homemade caramel sauce.

They make getting out of our cozy bed, totally worth it. 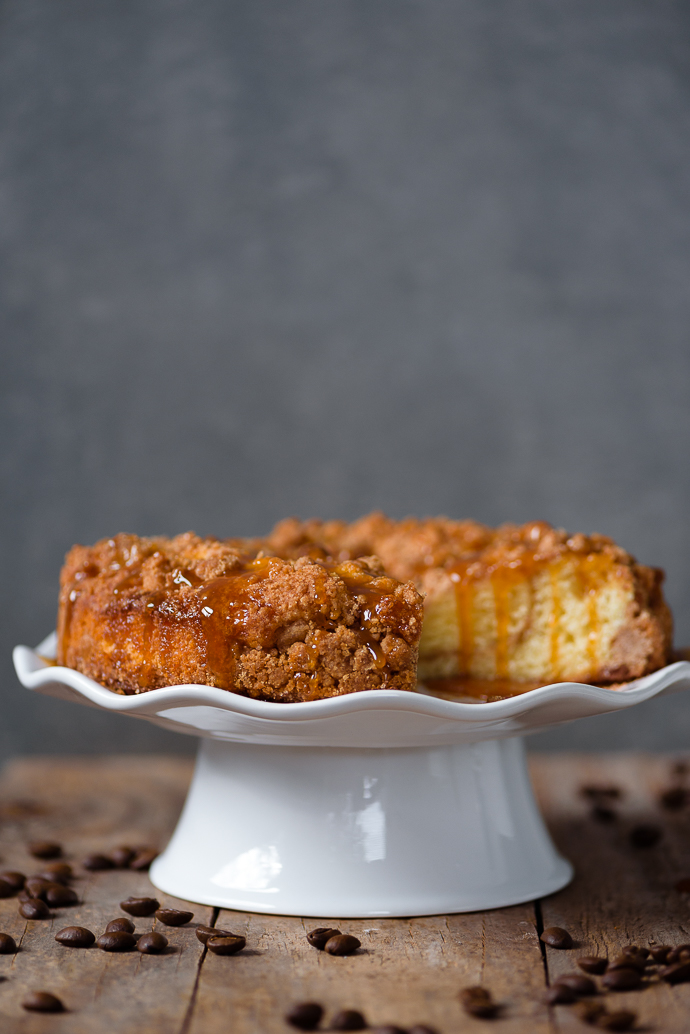 These cinnamon-spiced caramel lattes are inspired by classic, cinnamon and brown sugar laden, crumb-topped, caramel-drizzled coffee cake, which happens to be one of the flavors in Dunkin’ Donuts® Bakery Series® line of brew at home ground coffees.

Each of the coffees in the Bakery Series® line is subtly infused with sweet flavors inspired by favorite bakery treats – think cinnamon rolls, chocolate glazed donuts, and vanilla cupcakes – and for these lattes, I’ve used the caramel coffee cake flavor.

The lattes start with a few cups of freshly-brewed, Dunkin’ Donuts coffee. While the pot drips away, I heat the milk, whisked with cinnamon and dark brown sugar, which sweetens the coffee while adding deep caramel and molasses notes. If I’m feeling extra-indulgent, a dollop of whipped cream might make its way on top, along with a swirl of decadent homemade caramel sauce. 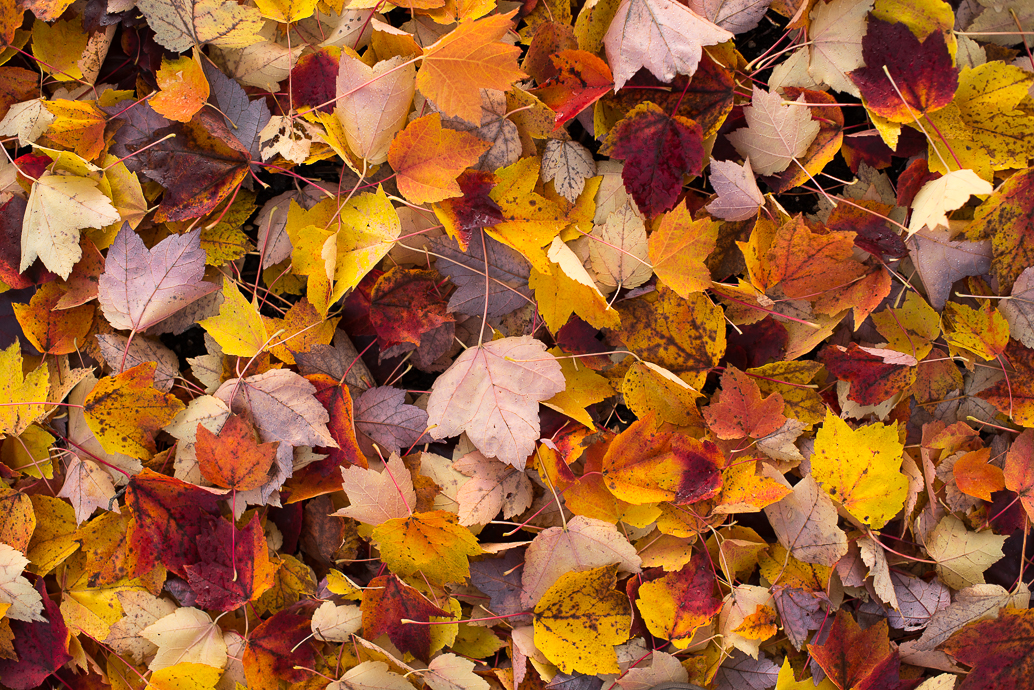 Five simple ingredients – sugar, butter, cream, vanilla, and a pinch of salt – transform in minutes, with heat and a little elbow grease, into an oh-so-magical, live-giving amber substance known thereafter as homemade caramel.

Caramel can take on many delectable forms, from chewy caramel candies to creamy and viscous caramel sauce prime for swirling into baked goods or drizzling atop your favorite coffee drink, and that’s where my focus is today. Because these sweet and flavorful cinnamon-spiced caramel lattes just aren’t the same without it. 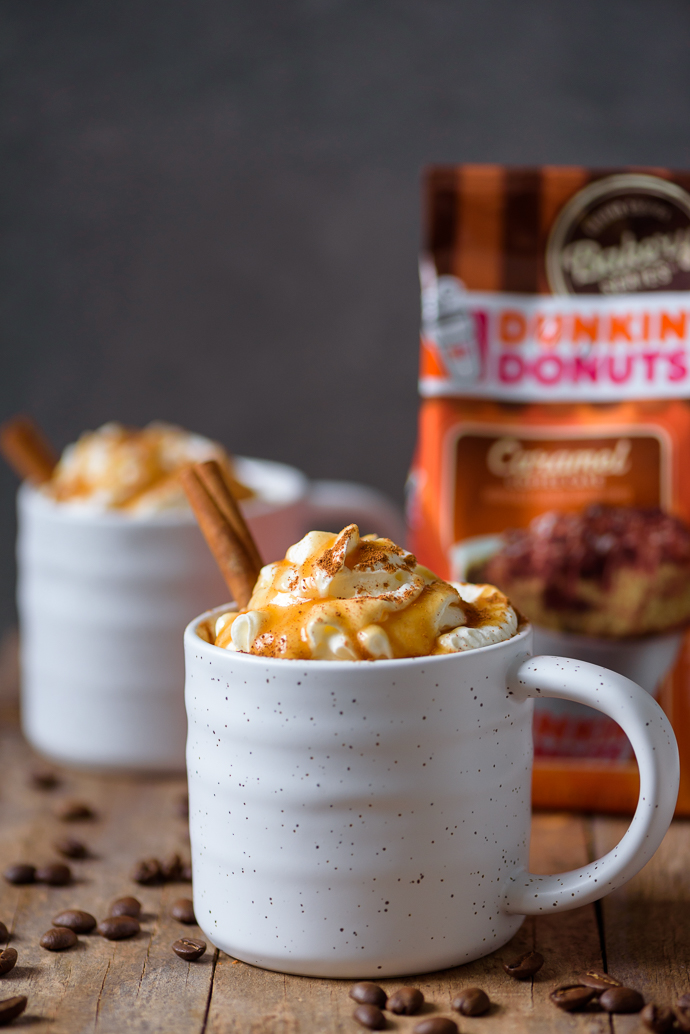 Homemade caramel can seem as intimidating as it is delicious – or it was for me the first few times I attempted to make it from scratch. But once you get the hang of it, and realize you can easily bust out a batch of homemade caramel in under fifteen minutes, you’ll be looking for all kinds of excuses to bake with it, and drizzle that liquid gold, over, well, everything.

I like to keep a jar of it in the fridge for my morning lattes, and of course, for any number of unexpected caramel emergencies. 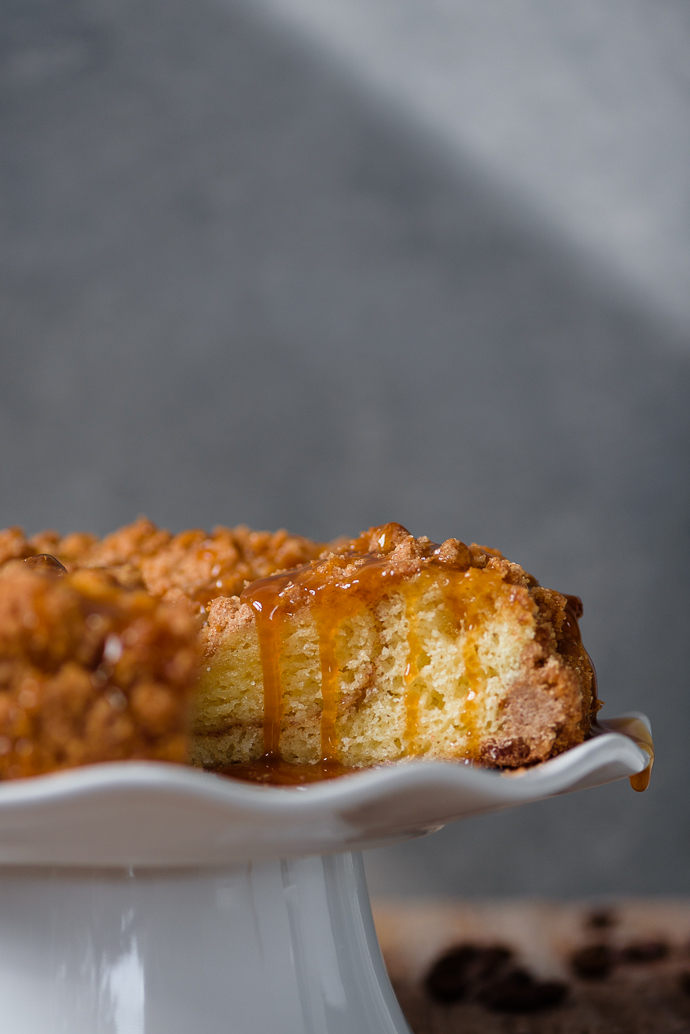 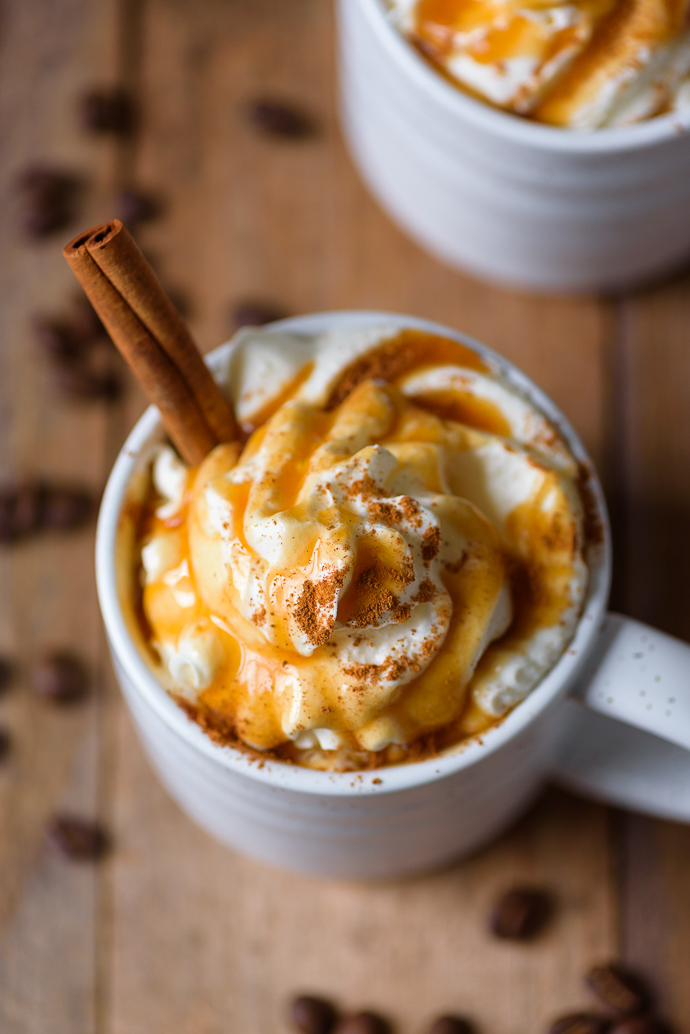 Now, if I’m honest, homemade lattes (caramel or otherwise) are best if you have a milk frother to warm and aerate your milk into a steamy, fluffy cloud to swirl into your freshly-brewed coffee, and I love, love, love mine.

Don’t worry if you don’t have one, though! I’ve included easy stovetop instructions as well.

The combination of warm and frothy, cinnamon and brown sugar sweetened milk mixed with hot Dunkin’ coffee under a sweet pillow of whipped cream and homemade caramel sauce, is bliss no matter how you go about preparing it.

Your mornings are about to get a whole lot cozier! 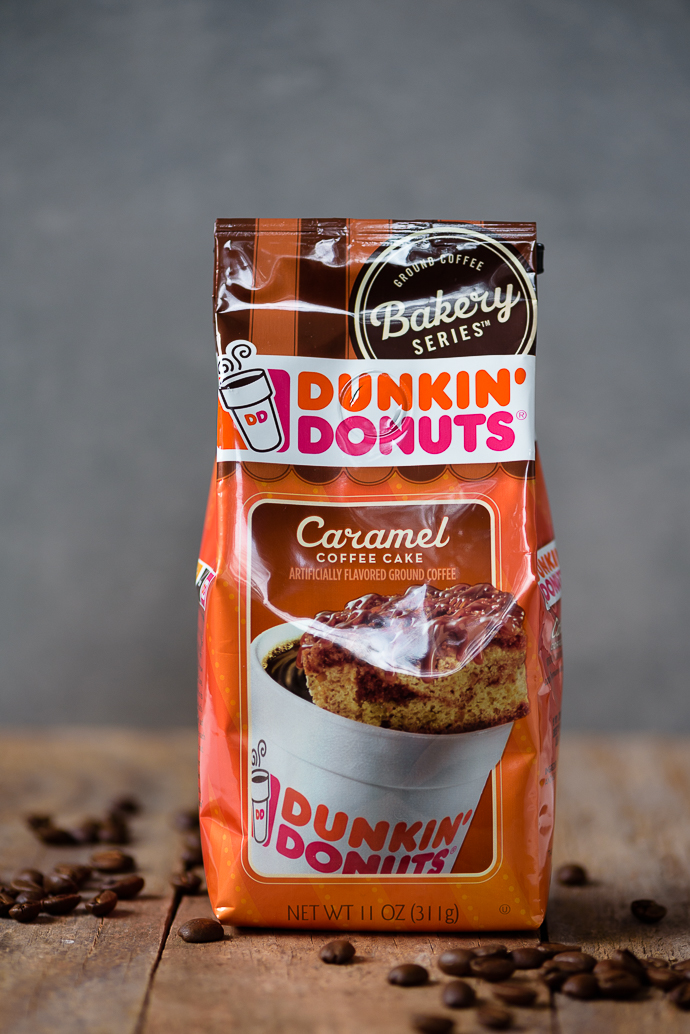 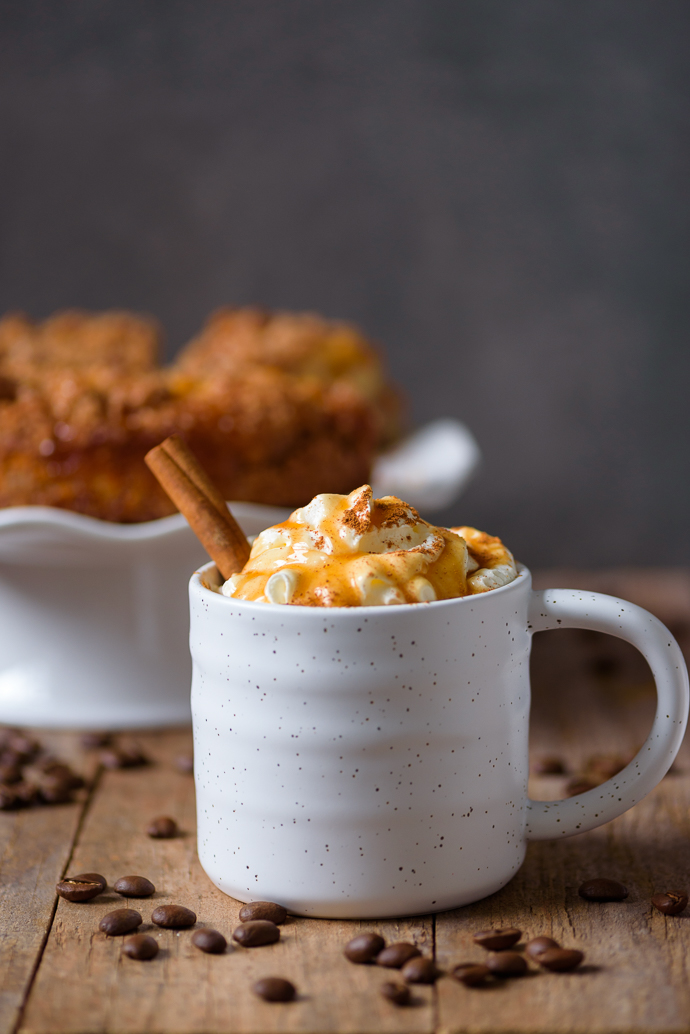 This post is sponsored by Dunkin’ at Home. You can find their Bakery Series® ground coffees at most places you buy groceries (I found mine at Target, Albertsons, and Fred Meyer). As always, all opinions are my own. Thank you for supporting the brands that support Fork Knife Swoon!

for the Cinnamon-Spiced Caramel Lattes

for the Homemade Caramel Sauce

*Use your favorite milk of choice. I find that whole milk, coconut milk, or cashew milk (or a mix) make for the creamiest lattes.