Tomato and Watermelon Salad with Feta and Herbs + An Announcement! 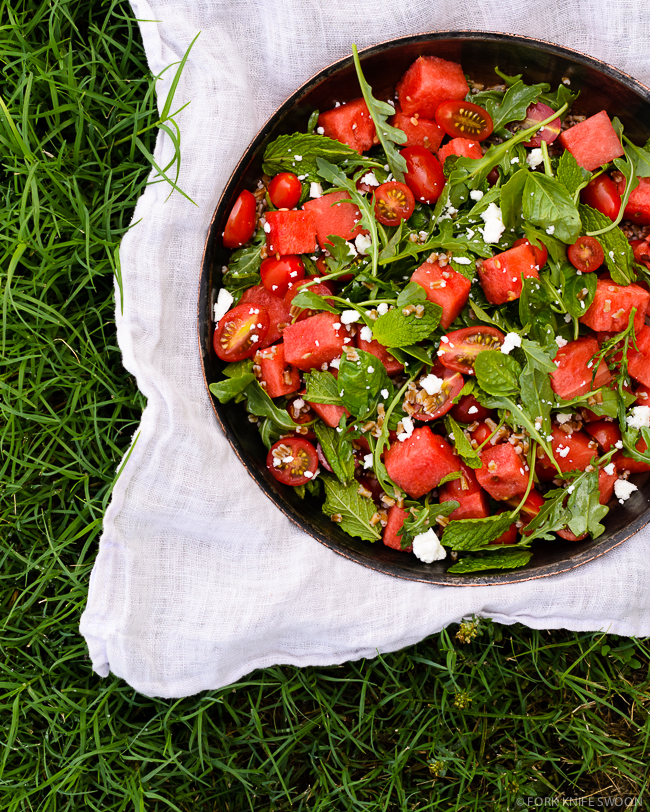 One afternoon, shortly after we moved to North Carolina, I found myself standing in the kitchen, talking the ear off of a friendly pest control technician, who made the mistake of asking me about cooking. The conversation wound its way around to southern food, and then of course, to barbecue.

I bemoaned the lack of great local barbecue joints, already pining for the half-dozen or so favorites we had left behind in Georgia. There was Three Lil’ Pigs, a mandatory stop on any motorcycle trip to Pine Mountain. Smokey Pig Barbecue in Columbus. Or J and L’s, the tiny bbq trailer we stumbled across on the way back from a weekend in Savannah, so small I’m not sure we could find it again. The owner came over to our table with banana pudding and thanked us for stopping in. 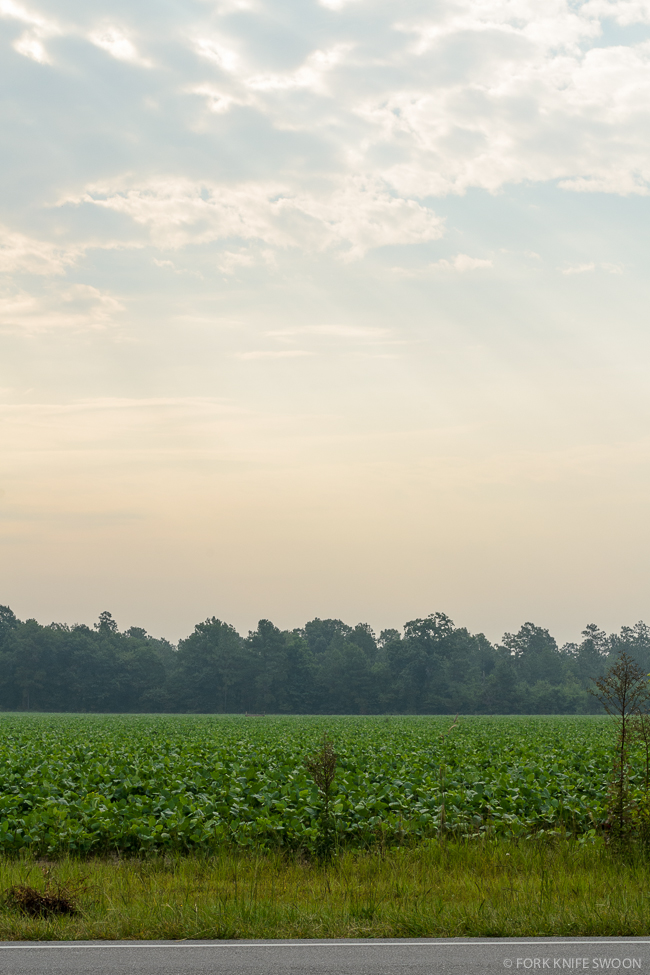 Our worker assured me that we would find great barbecue here in Fort Bragg too, and in fact his family was in the business of barbecue themselves. Only they didn’t have a restaurant, not yet. Every Saturday they took orders though, and spent the day cooking and serving a growing customer base at the family produce stand a few towns over from us.

There was a plan for a real restaurant, he proudly told me. One brother made weekly treks down to Florida, bringing big, juicy watermelon back with him to sell in the Carolinas and up in DC, where they commanded a higher price. The brothers sold the melons along country roads out of a pickup, the whole family working and saving up bit-by-bit for their barbecue dream. 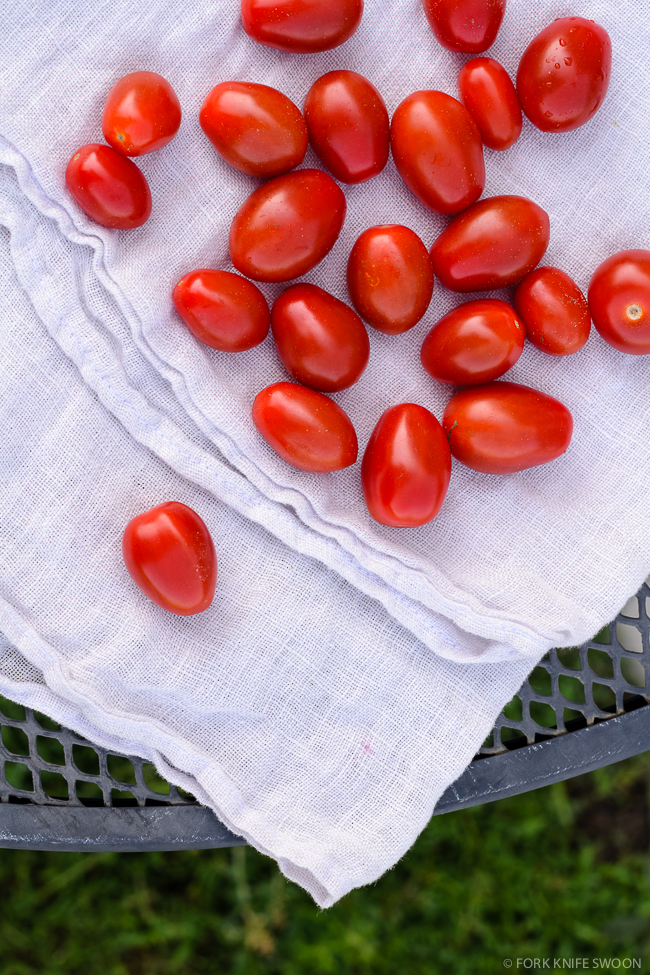 I promised to stop by the stand, one weekend, before finally letting him get to his next appointment. We never made it out there to try their barbecue, daily life getting in the way of my best intentions.

But in the summer, when late-model pickup trucks parked on the side of the road beneath towering pines, tailgates stacked tall with produce, are a regular sight, my mind wanders back to those hard-working men selling watermelons to build their something more. 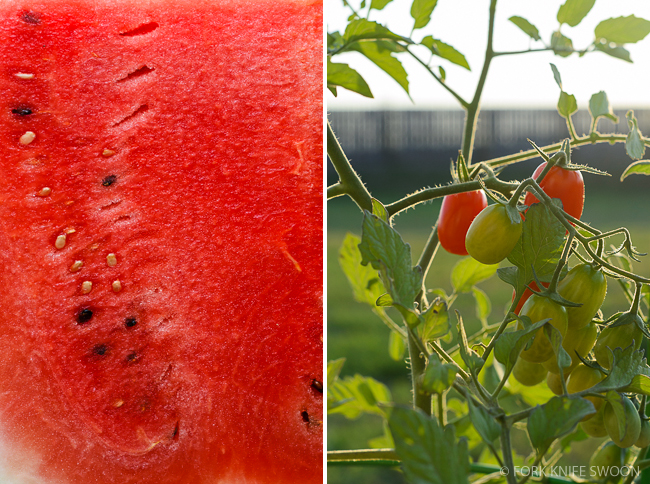 The watermelon at the market lately has been fantastic; vibrantly red and deeply flavorful…the way that watermelon should taste. I’m in the habit of buying big melons and cubing them, mostly for easy snacking, all times of the day, but occasionally, they wind their way into simple summer dishes. Combined with blueberries and a squeeze of lime for breakfast, or juiced and transformed into popsicles (coming soon!), to name a few.

This super refreshing, light salad is perhaps the most effort I’ve gone to with watermelon this season (and even here it’s ridiculously easy). The watermelon cubes are tossed with sweet-tart cherry tomatoes, salty feta and tons of fresh herbs in a tangy lemon vinaigrette. I’ve added some wheat berries here to make it more of a meal, but you could easily skip those for an even lighter version.

If the combination of watermelon and tomatoes gives you pause, I’ll say that though it may seem somewhat strange or surprising, it just works. In the most complementary, summery, and completely refreshing way. 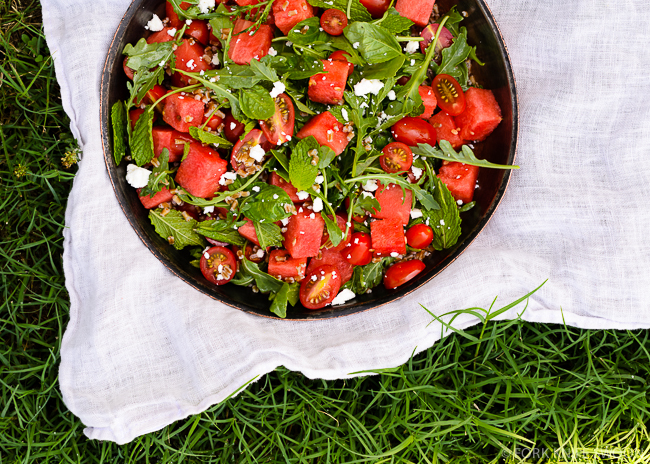 Which brings me, finally, to our something more. After two years in the south, we are moving back to the west coast! To Seattle!

We’ve known for a little while that we would be moving, the Honey taking over a new command sometime this summer, but just found out (much earlier than expected) that it’s official, and suddenly have less than a week until we embark on our new adventure in a new city. We’ll be starting our trek across the country, road-trippin’ and then finding a house, and… things will be pretty crazy for the next few weeks.

Moving here was always a concession; the sacrifice made so that the Honey and I could have a life together. Those are the kind of decisions to be made when you find yourself falling in love with a handsome Army Captain who happens to live some two thousand miles away. I don’t regret it for even a moment, but do still feel like a tourist in this place in many ways, so far from friends and family, and the familiar. Leaving is bittersweet though; we have had some wonderful memories here.

But we are ready to say goodbye to the South. To North Carolina and her red-earthed, untamed countryside. To endless fields of corn and cotton alongside murky swamps and dark, mysterious woods. To the constant hum of insects and the bracing rumble of artillery rounds in the distance. To ivory swaths of dogwood flowers and towering purple wisteria in the spring, and fresh peach ice cream and corn by the bucket in the summer.

To the place where the Honey and I fell (deeper) in love, started a home, adopted our pup, and became Mr. and Mrs. It’s been an incredible adventure, and I cannot wait for the next chapter.

9 comments on “Tomato and Watermelon Salad with Feta and Herbs + An Announcement!”