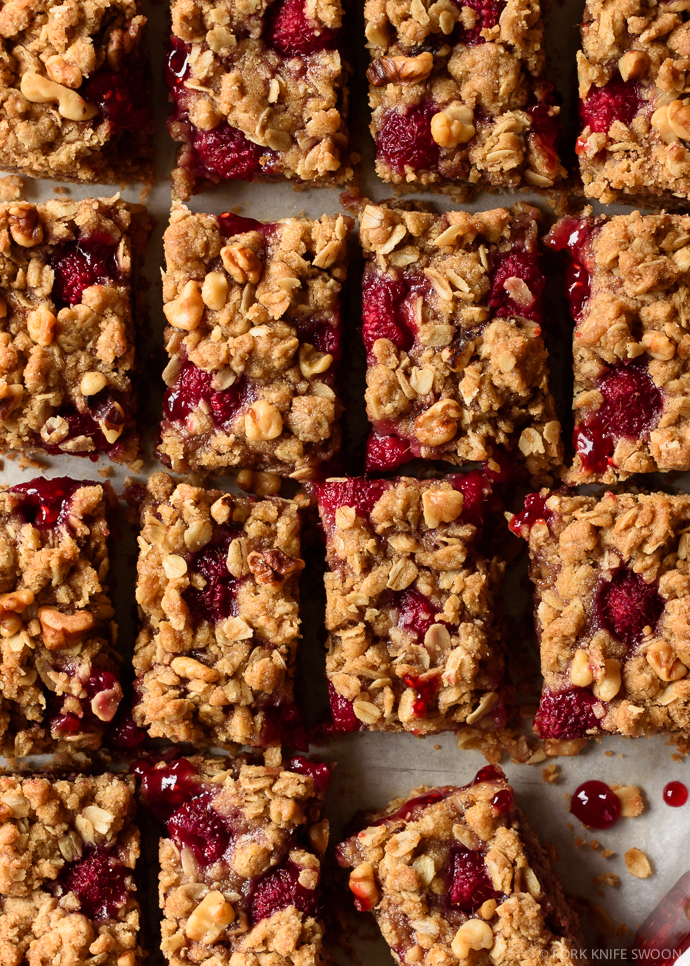 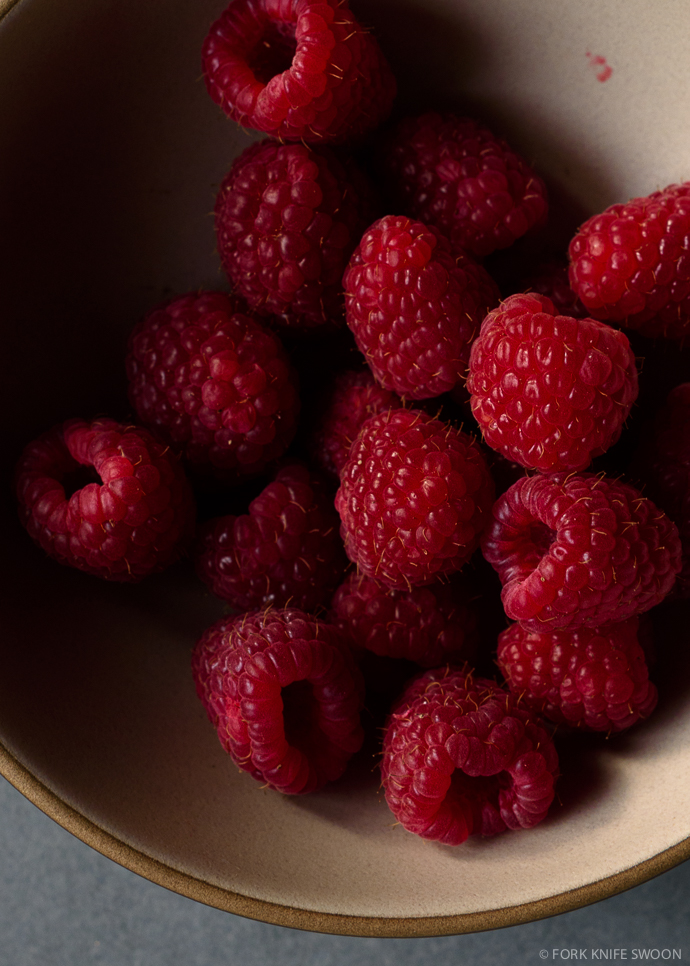 When spring came, even the false spring, there were no problems except where to be happiest. – Ernest Hemingway, A Moveable Feast

I still get weather alerts for our small town in North Carolina, my phone lighting up every time a tornado or severe rain or snowstorm makes its way towards Hoke County. The semi-frequent pings are a sort of tormenting nostalgia, a reminder of the Southern home, set between corn fields, cow pastures, and wooded pines, that I didn’t think I would miss.

Last Winter, I stood in my pajamas in the icy air of the front stoop and took pictures of our white-blanketed neighborhood to send to my parents, thrilled to wake up to our first ‘snow day.’ A good part of that morning was spent nose happily pressed against the fogged-up front windows, watching snowflakes gently coating the rooftops and cars and our quiet street with powdery drifts of snow, and taking a few breaks for steamy cocoa and bundled-up romps in the buried back fields with the pup. All the sorts of things most coastal-California transplants do the first time it really snows.

The novelty subsided with each snowstorm; it doesn’t take all that long for winter fatigue to set in, and I’m sure most of you in the East and Midwest, those of you enduring numbingly repetitive, miserable weather for the past few months, have long been dreaming of Spring. Meanwhile, here in Washington things are comparatively balmy. We’ve had the warmest Winter on record, the markets are filled with buckets of tulips, and the first daffodils popped up weeks ago, in front yards and along the roadways, cheery, vibrant swaths of canary yellow against mossy, evergreen pines and the ubiquitous grey sky.

But I’m often caught wandering between both places, between seasons. Memories as tangled as our wild, prickly, backyard blackberry brambles. The budding cherry trees hinting at Southern dogwoods. By now they might be starting to bloom, those graceful, delicate, branching blossoms, a last white gasp, between snow and the wild, explosive green growth of early Spring, when the land begins to hum again. 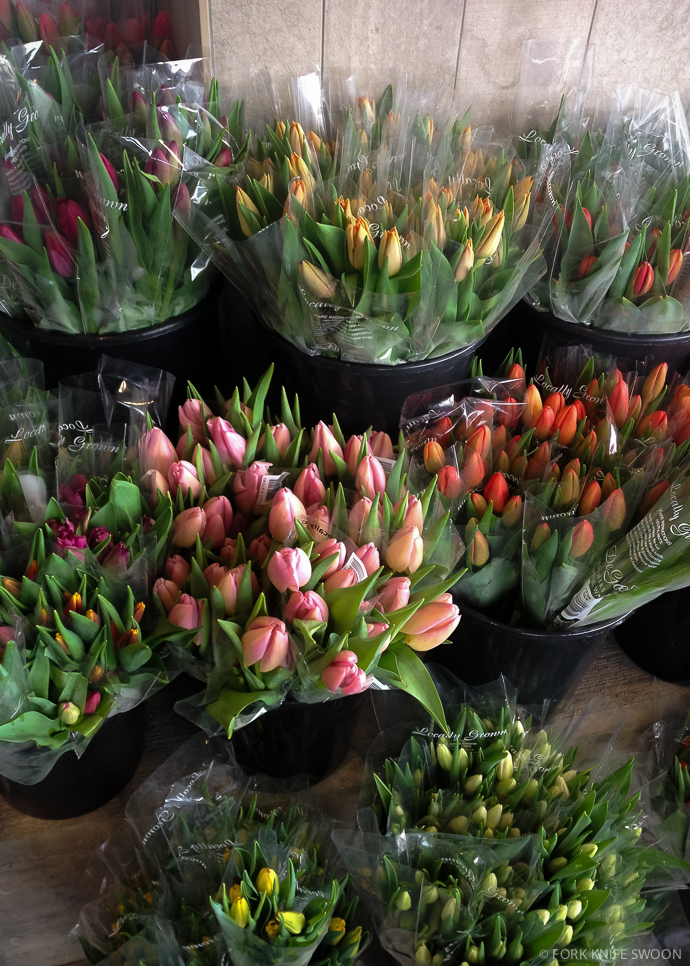 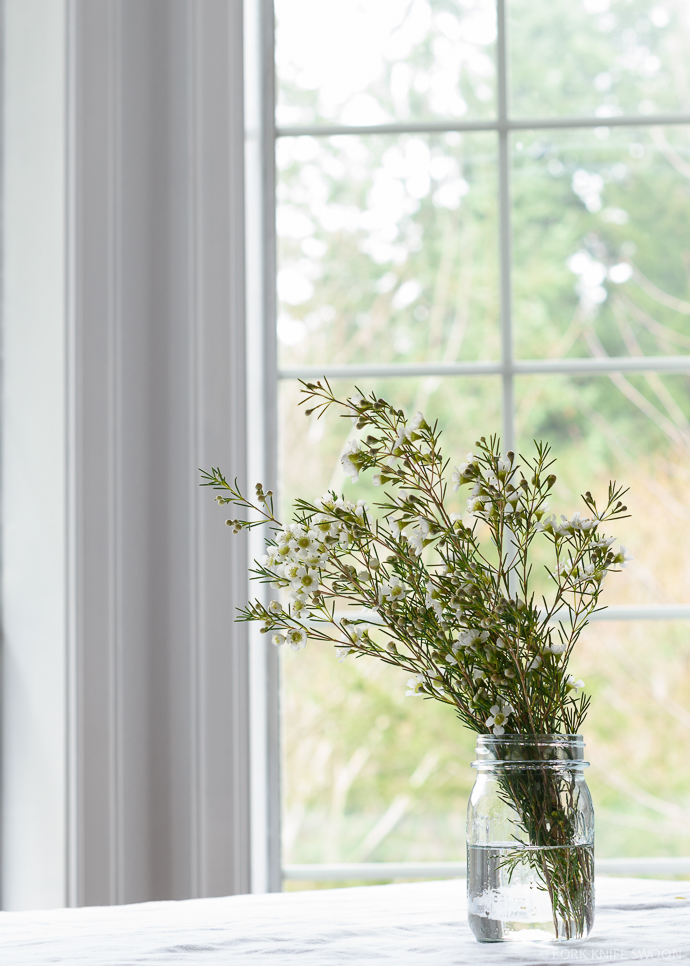 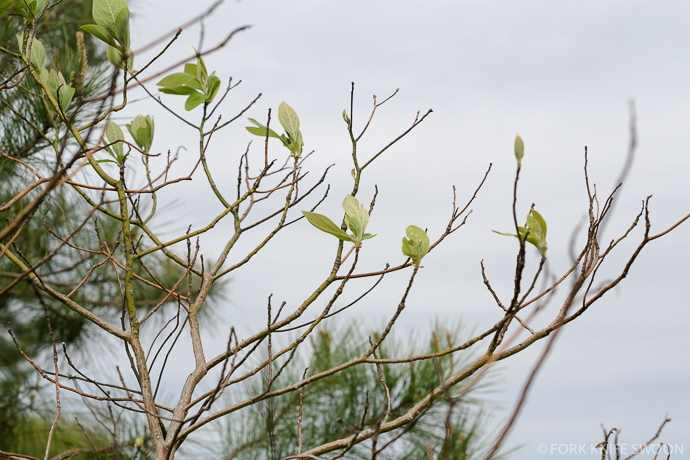 Now that it’s officially Spring, daylight and warmth are within reach. I’m channeling those longer, brighter days with these gooey, raspberry jam crumble bars, thanks to last Summer’s berries, which I hoarded like a crazy person.

Any berries that weren’t eaten straight from their baskets were frozen, preserving my ephemeral stockpile, but also as insurance, a sweet means to brighten up the inexhaustible, grey drudgery of Winter with berry smoothies, jams/sauces/compotes and of course baked fruit pies and crumbles, once the seasonal abundance ended. The freezer was packed with bags of plump, peak-season berries divided nicely by variety: blue, black, and…rasp. I’ve mostly cooked my way through them… just in time for the upcoming strawberry crop to stake its claim. 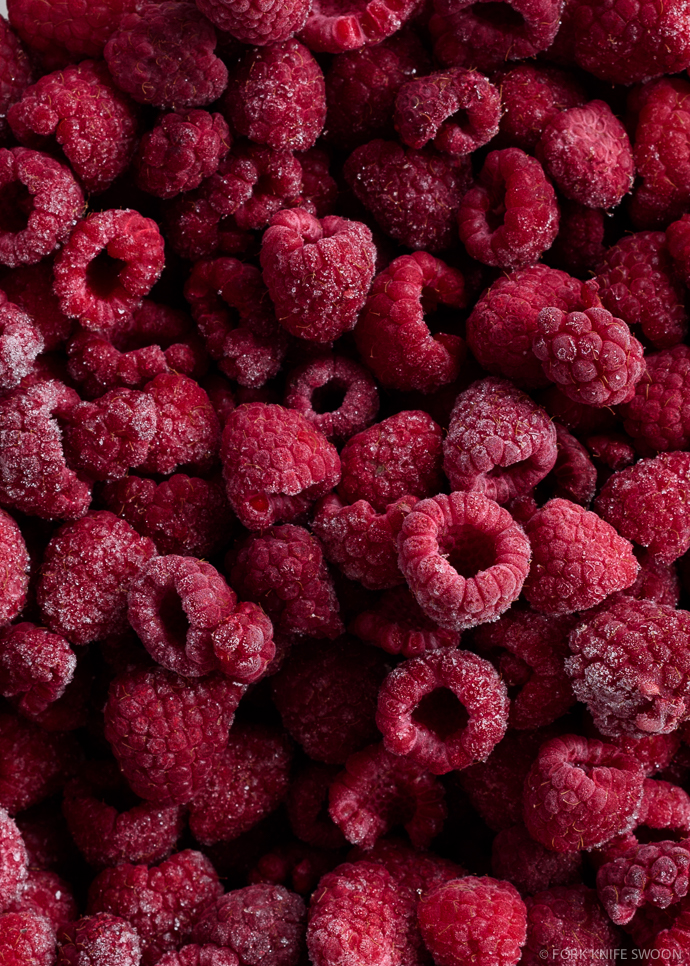 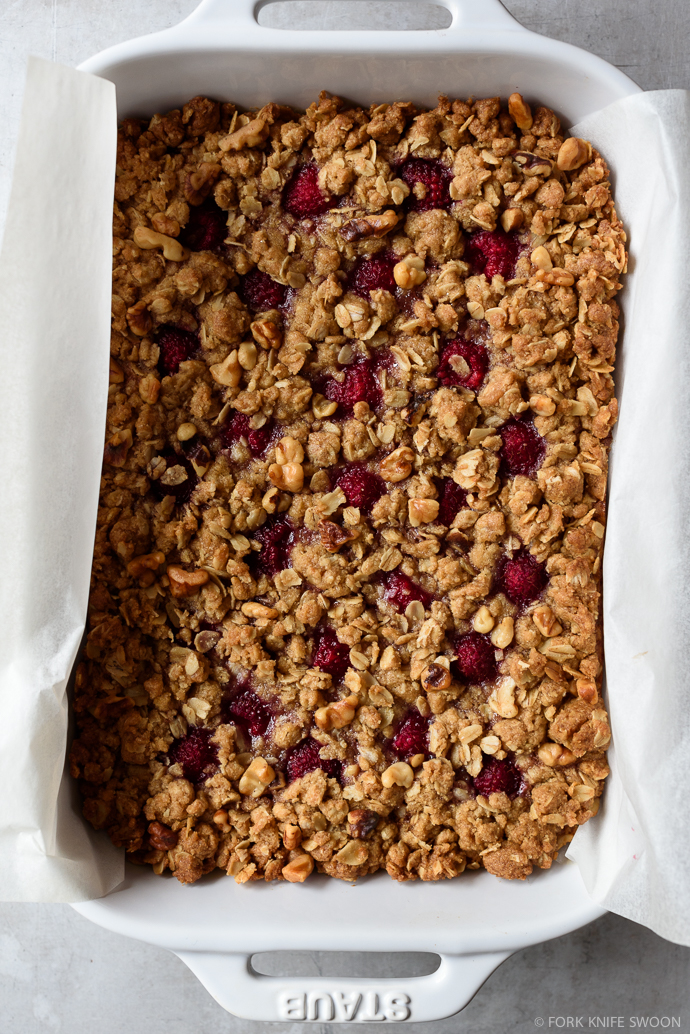 I almost made you another berry crumble, which never fails to please around these parts, and sounded utterly cozy and decadent in this last bit of Winter, but I had my heart set on a raspberry filling. Frozen raspberries are quite delicate post-defrosting, and are much better off left in their frosty state or destined for a thick, citrus-scented, vanilla-infused homemade quick jam. So instead, I present you with these gooey, jam-filled, brown sugar raspberry oat crumble bars, variations of which I make quite often, but, have unforgivably not yet shared with you.

The crust and crumble topping are one and the same, filled with whole oats, brown sugar, and warming spices, and sandwiched around a jammy, homemade raspberry jam filling, studded with vanilla and a hint of winter citrus, which all melts together into a sweet, tangy, gooey, crumbly, delicious bar. 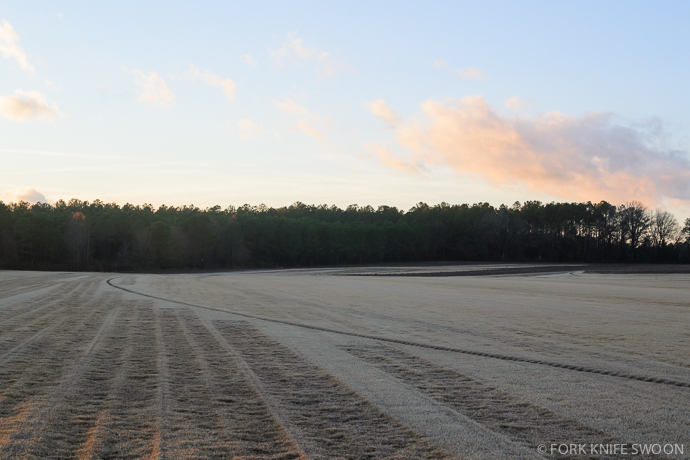 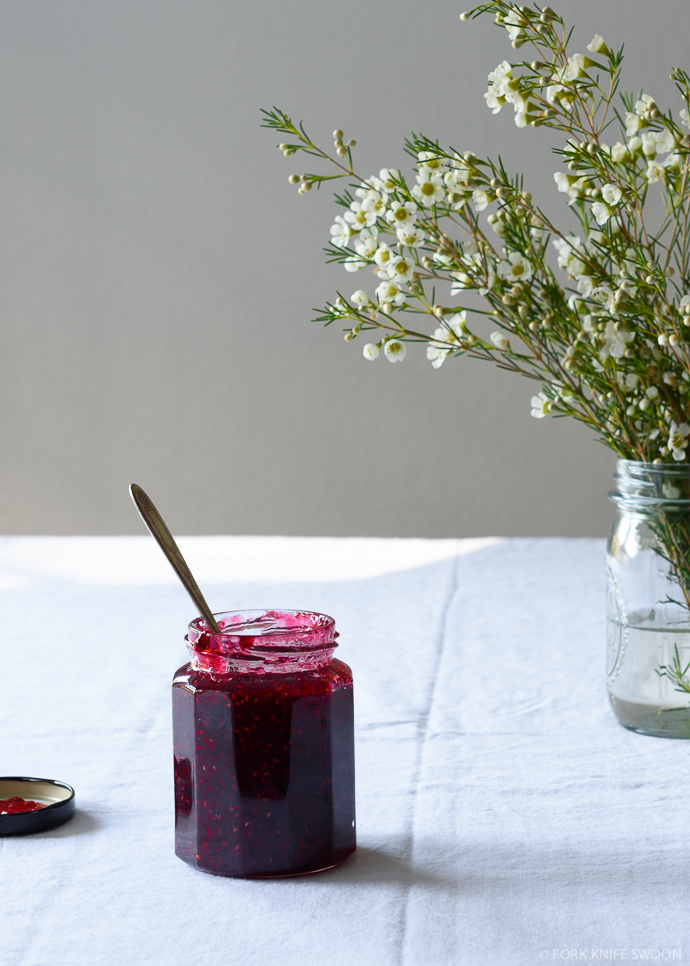 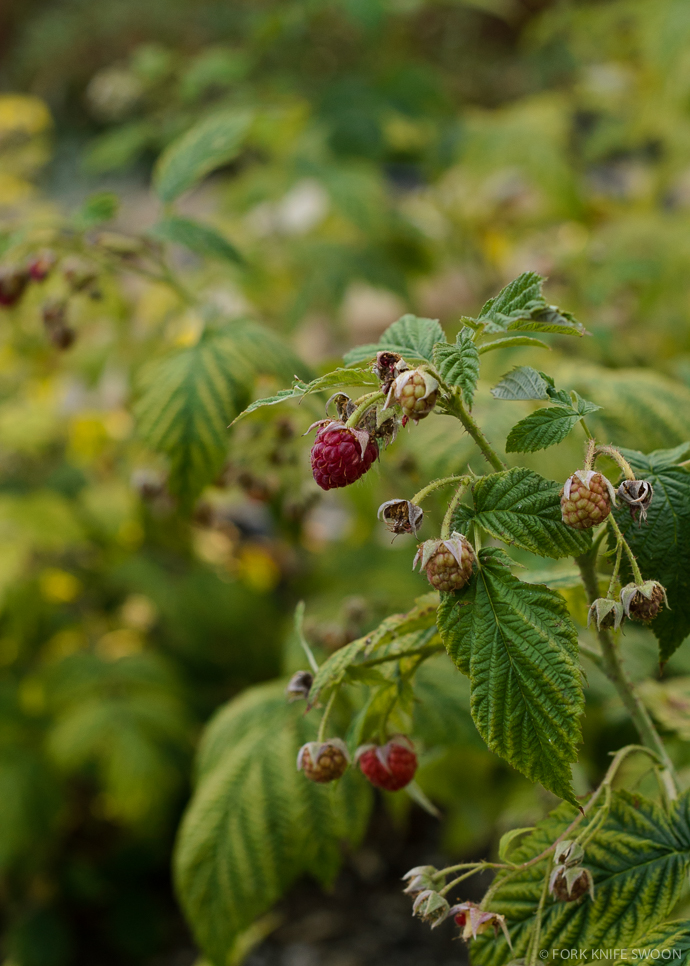 The basic crumble bars can be made more or less wholesome, the butter and flour substituted for vegan or gluten free options, and I’ve listed a few suggestions if that’s your thing, but I’ve written my favorite, traditional ingredients into the recipe below. The fresh raspberries nestled into the crumble topping are entirely optional, and I might not have included them (in the middle of winter at least) had I not happened to have some to use up from an impulse buy at the farmer’s market a few days before.

If you’re feeling particularly inspired, the homemade raspberry filling/quick jam is great, though I would never fault you for using your favorite store-bought jam or preserves (I like Bonne Maman), which would of course hasten the preparation time quite a bit. Either way, these jammy, crumbly bars are a sweet, indulgent treat to hold you over until warmer weather. Happy First Day of Spring, wherever you may be! 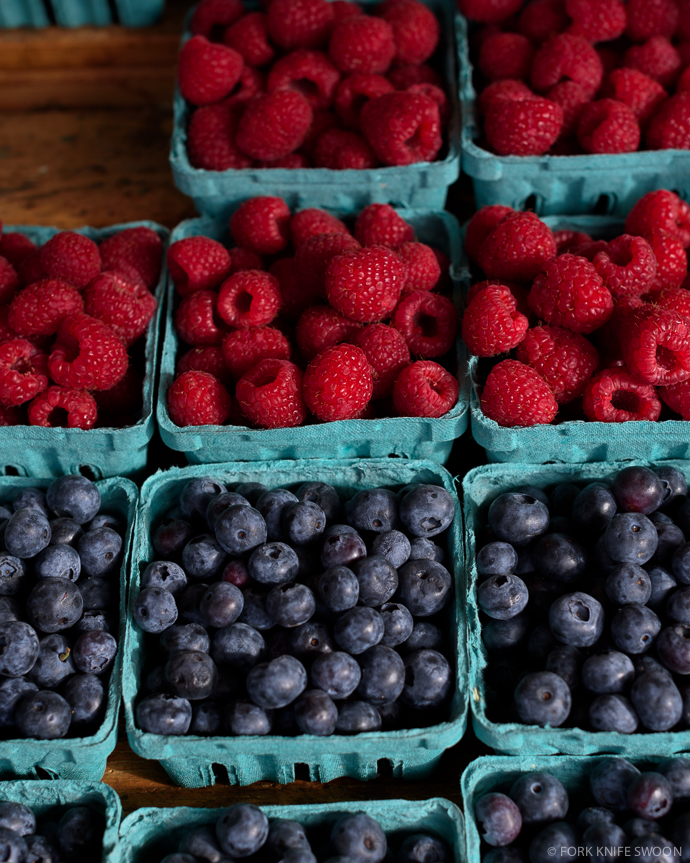 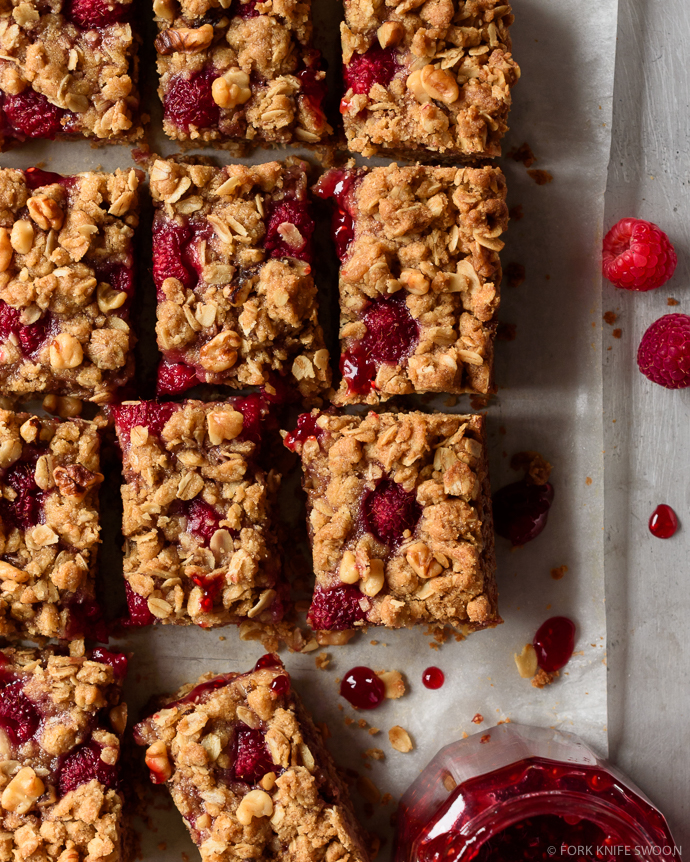 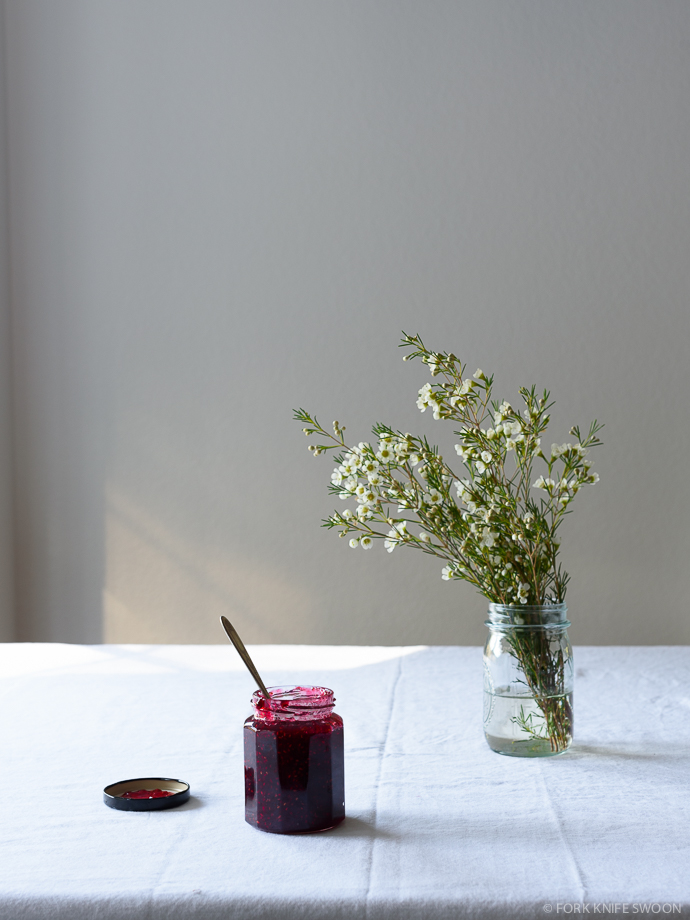