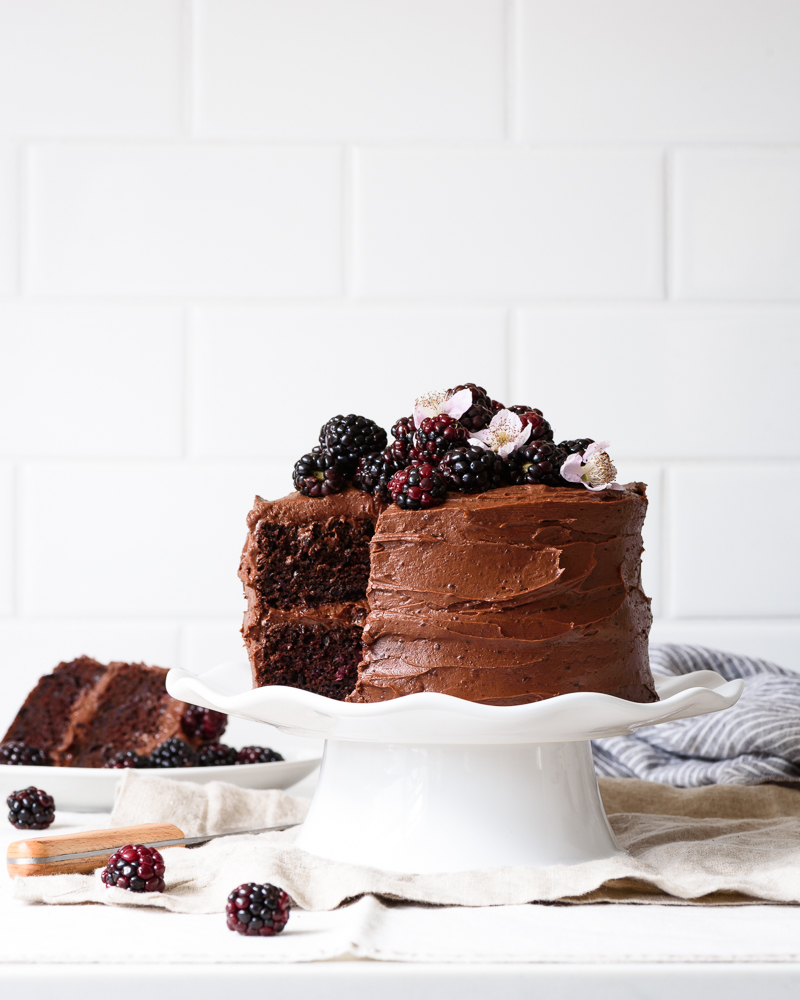 I’m a big fan of sneaking fruits and vegetables into chocolate baked goods – bananas, pumpkin, zucchini, berries, you name it – and this blackberry chocolate cake is no exception.

The plump, late-Summer fruit, cooked down into a fragrant, jammy blackberry mash, adds a subtle, but welcome fruity complexity, moisture, and faint reddish hue to an already deeply cocoa-filled cake.

It’s a rustic cake simple enough for everyday baking, with flavors unusual enough to feel decadent for special occasions. The batter comes together easily – one pot for a homemade blackberry jam (which flavors both the cake and frosting), one bowl for the rich, chocolate batter, one for the chocolate buttercream frosting – and makes use of the tangles of wild blackberries growing with abandon in our backyard this time of year. 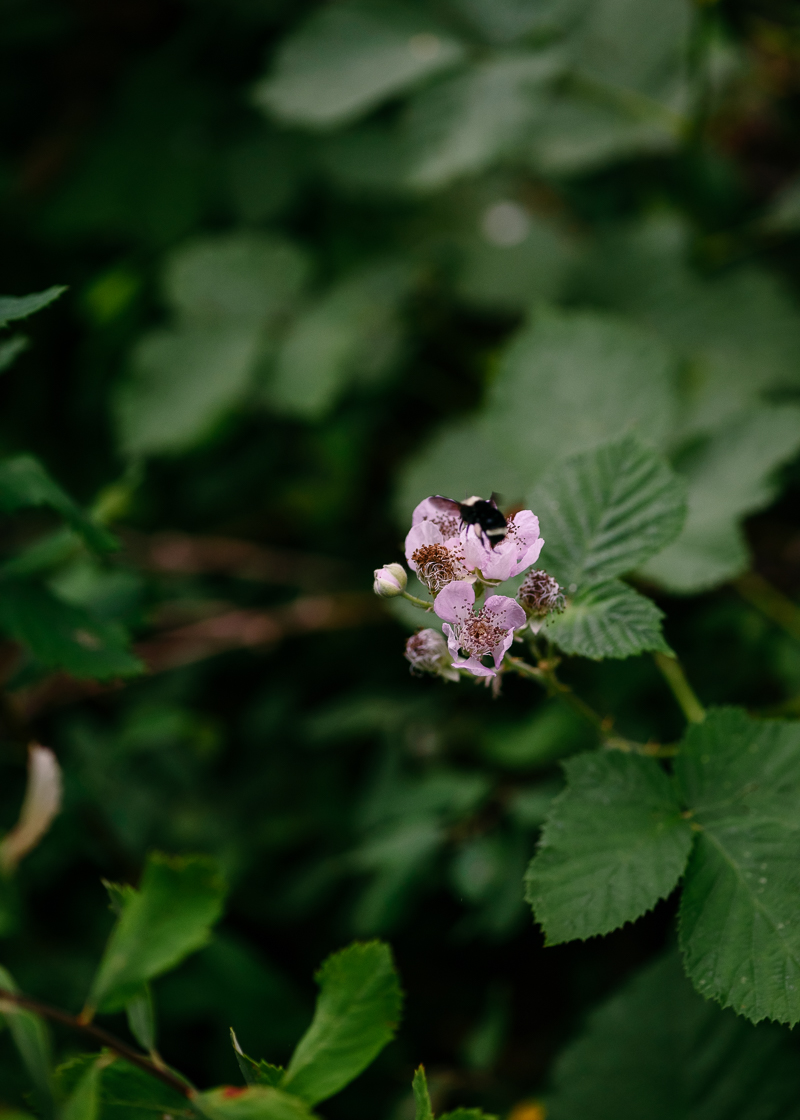 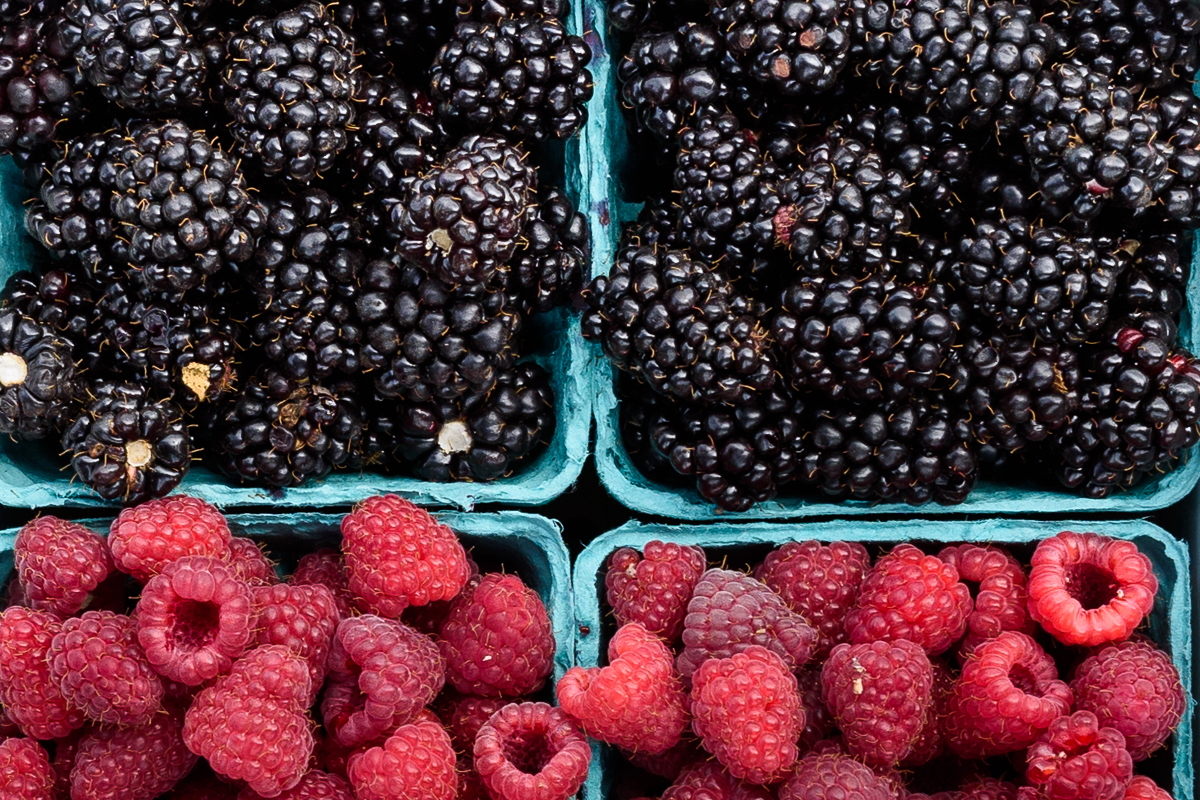 On a personal note, this cake is also a celebration of the upcoming arrival of our little one, who is about to change our lives forever, turning our family of two into three. And almost as important, my husband making it back in time for his birth.

In a clear example of ‘we make plans, and the Army laughs,” or, the worst timing in the world, he unexpectedly deployed again, for the second time this year, in early July… right around the time I hit the seven and a half months pregnant mark.

There were and are a lot of emotions around that, and a good deal of logistics and details to figure out, and we decided it would be best for me to pack up and head down to California, to stay with my parents, just in case I went into labor early.

So I’ve been back in my childhood home for the last few weeks, trying not to succumb to the stress and the overwhelm and the hormones, and majorly willing this baby to stay cozy until at least his due date. Thankfully, as of yesterday, he has cooperated. We are full term, the hubs is here, and he’ll get to meet his son right away, instead of early next year.

My husband is still going to miss so much when he heads back out to the field after a precious ten days together after the birth, and I haven’t even begun to process what those first few months solo-parenting will be like.

But for now there is cake. Wonderfully decadent blackberry chocolate cake. And he’s home. And so, there is lots to be thankful for. 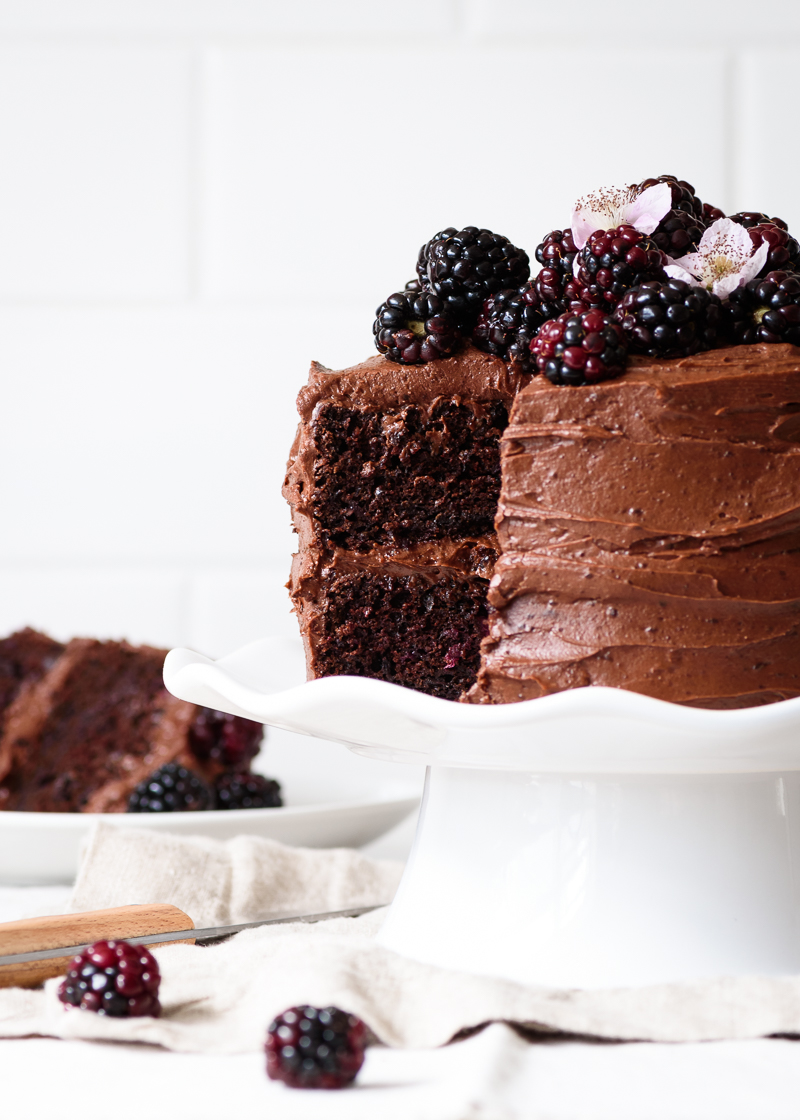 This will likely be my last recipe until our little guy arrives, and I’m not sure when I’ll get back into the kitchen. I’m already looking forward to fall and holiday baking, and hopefully, once there’s a bit of an established rhythm to this whole new mama thing, I’ll be popping in again before too long to share some goodies with you. Thank you as always for following along and supporting this space – I truly couldn’t do this without you!!

for the blackberry chocolate cake

for the chocolate buttercream frosting

for the blackberry chocolate cake

for the blackberry buttercream:

¹ The espresso powder can be omitted, but I like to add just a pinch to chocolate recipes. It won’t add much of a coffee but enhances the natural chocolate flavors of the cake.
² I kept the frosting rustic on this cake (and didn’t spend the time to do a crumb coat). For a smoother, less “homemade” look, spread a thin layer of buttercream on the sides to lock in the cake/crumbs, refrigerate for at least an hour, then spread on a final, smooth layer of buttercream.
³ If you’d like to make this blackberry chocolate cake into cupcakes, look no further.
⁴ The original recipe happens to be vegan, but, worried about the stability in layer cake form, I did add an egg. You could likely replace that with a flax egg, or take your chances without, but I haven’t tested it.